Joe Deninzon’s virtuosic violin playing adds an elegant grace and down-home spunk to the rest of the musicians’ fusion grooves. On this live album recorded in Erie, Pennsylvania, Deninzon run through several numbers of hot jazz rock, highlighted by some dazzling playing by the members of Stratospheerius (a variation of Stradivarius-get it, Deninzon’a violinist)-guitarist Jake Ezra, bassist Ron Baron, and drummer Luciana Padmore. In additiono to several of his originals, Deninzon’s also does a rip-roaring version of the Simpson’s theme and an acid-funk take on Stevie Wonder’s Contusion. Fusion music may not be everyone’s bag (there is some people out there who revile it), but this album might prove the contrary through the amazing musicianship.

Live fusion hot as a habenero! These guys kick major colon! The feel is Jeff Beck meets Takanaka with a hint of Dregs – hot rockin’ jazz fusion that never lets up. Deninzon is wicked on electric violin – his fingers are on fire! Jake Ezra matches him note for note on guitar, and the rhythm section of Ron Baron on bass & drummer Lucianna Padmore are twin firecrackers. There are a few “jam band” elements here, but never to a point of annoyance.

I was enthralled by their reinventing of The Simpson’s theme and a cool cover of Frank Zappa’s “Magic Fingers” from the “2000 Motels” soundtrack. Deninzon originals like “What’s That Thang” and “An Evening Nap In The Afternoon Sun” are tasty, tasty fusion. While not in the prog realm, if your tastes run to “Blow By Blow” era Jeff Beck, Weather Report, or Steve Vai, you’ll find “Live Wires” has much to offer. 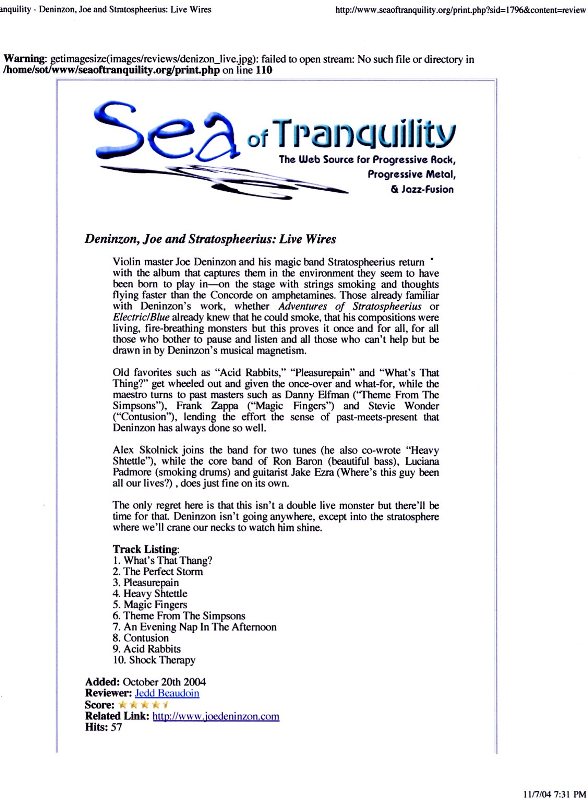 While Deninzon’s studio outings served as fine introductions to the New York-based maestro, this little sonic boom captures him unhinged and unencumbered as he leads his fiendishly good mates into strange and bold new worlds that leave now jaw snapped together, no heart beating at anything approaching a normal rate. Sounding more relaxed and confident than ever, Deninzon unleashes the fury on “Shock Therapy,” “The Perfect Storm” and shines in the vocal department on the lovely and amazing “An Evening Nap In The Afternoon.”