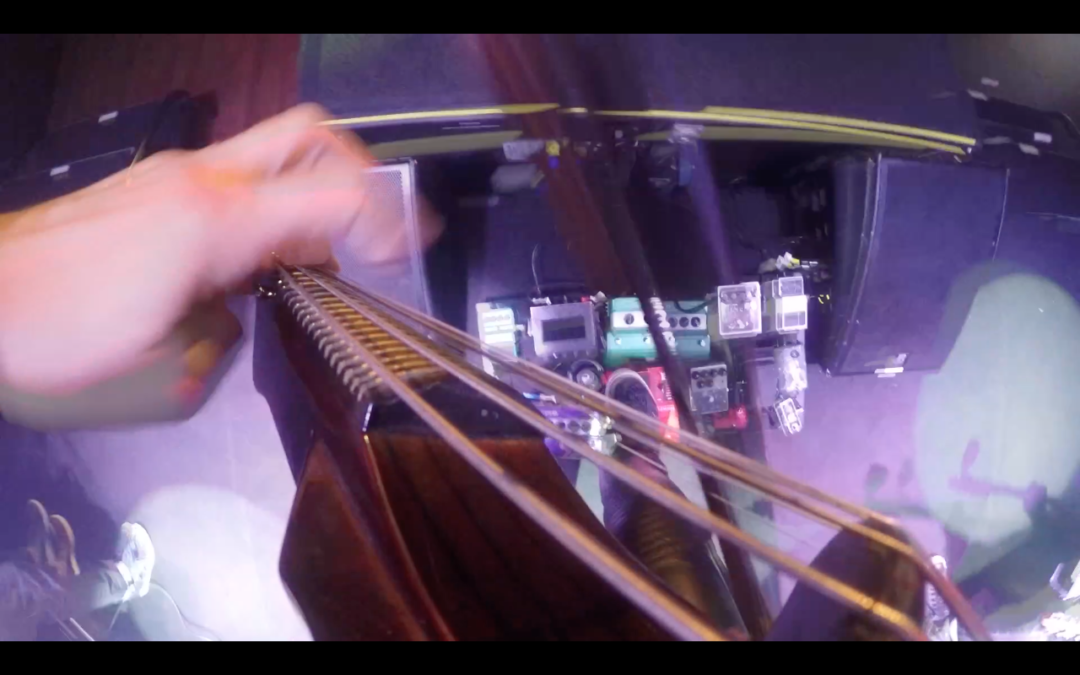 I proudly present to you the first official video off of Stratospheerius‘ upcoming CD, “Guilty of Innocence” on Melodic Revolution Records. This is our re-imagined version of Muse’s classic, “Hysteria!”

The band Stratospheerius features Joe Deninzon (vocals, violin, mandolin), Jamie Bishop (bass), Aurelien Budynek (guitars), and Lucianna Padmore (drums). The sound is hard to classify in a genre.It combines modern and classic music in a way that is hard to find. The new album Headspace showcases the style nicely. 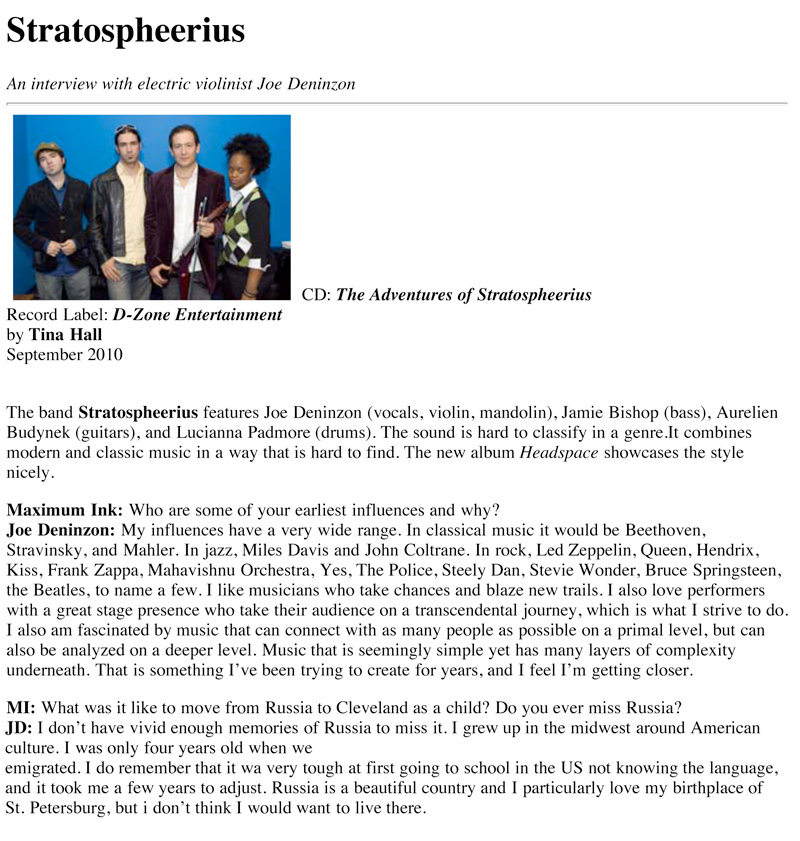 There’s so much going on on this CD that it could merit an “Indie Round-Up” column all on its own. Stratospheerius’s music can’t be pegged to one genre, but neither is it a simple hybrid of a couple of styles. For that reason, it’s exciting stuff.

Jazz fusion, Stingpop, progressive rock, classical strains, and jam-band spaceouts take turns running through the ten songs on this, the band’s fourth album. Leader Joe Deninzon’s devilish violin weaves the compositions together, and he lends his throaty vocals to some of the tunes, layering attractive melodies over odd time signatures and dynamic, unpredictable arrangements. Think of a much more adventurous version of the Dave Matthews Band, add Steely Dan precision and prog-rock inventiveness, and you’ll get an inkling. There’s also a Police influence that would be quite evident even without the revved-up cover of “Driven to Tears.” The crack musicians deserve mention individually: drummer Luciana Padmore, bassist Bob Bowen, and guitarist Mack Price.

These songs really do sidestep genre, yet one foot remains in accessible pop territory. “New Material” opens with a Celtic jam that flames into a lightspeed funk-rocker. The song is a funny take on creative inspiration and writer’s block: “I need a death threat deadline panic attack/I need a big bolt of lightning to strike me in the ass/Where’s my material/I need new material.” “Mental Floss” is an exciting odd-time instrumental jam, while “Gutterpunk Blues” begins with a delicate-punk (a new term I just made up) mandolin solo (Deninzon again) which leads into crashing heavy-metal riffage and then devolves into wild electric guitar and drum soloing. The jazz fusion elements come to the fore in the slower instrumental “Yulia,” while the pumped-up klezmer of “Heavy Shtettle Part II: Heavier Shtettle” closes the CD with a blast of technical prowess and ear-candy fun.

An interesting and spirited journey into outrageous creativity, this CD is highly recommended for anyone with an adventurous ear, including fans of fusion, progressive rock, the Police, the Kronos Quartet’s pop experiments and collaborations, and fiery fiddling. Sample the music at the Stratospheerius website and their Myspace page, and read a good interview with Joe Deninzon.

Jon Sobel reviews music and theater on a regular basis for Blogcritics, and occasionally comments on politics, world affairs, and life in New York City. He is also a computer professional, musician, and small-time concert promoter in New York City. (His band, Whisperado, can be criticized at will.)

Hailed as champions of “psychojazz trip funk,” Stratospheerius leap deep into progdom withHeadspace — a smart and satsifying album in which a mandolin-powered instrumental called “Gutterpunk Blues” can straddle a frantic, spot-on cover of The Police’s “Driven to Tears,” and a Jewish heavy metal anthem (“Heavy Shtettle Part II: Heavier Shtettle”) and a solid, fiddle-fueled rocker about a songwriter pissed off because he can’t write a song (“New Material”) book-end a collection of 10 equally fascinating pieces.

Fronted by electric violinist (and guitarist, singer and mandolin man) Joe Deninzon, Stratospheerius veers more heavily from its instrumental past into vocal-based music influenced as much by Bruce Springsteen and Joni Mitchell as Frank Zappa and Bela Fleck, Kansas and The Flower Kings. Hence, these songs tell stories that, coupled with some intense instrumentation that the quartet makes sound way too easy, emerge as substantial pieces of ear candy. And the three instrumentals here improve significantly upon the band’s earlier work.

Despite the unusual shredding (mandolin rules, dude!) and virtuoso aspirations inherent in this music, Headspace resonates with an earthbound freshness that reflects a charming change of direction for a band that’s already established itself as critical darling. The possibilities just became seemingly endless.