Joe Deninzon has contributed to over 100 recordings as and electric and acoustic violinist, mandolinist, singer, songwriter, and arranger. If you want Joe to contribute to your project, click here.

Here are a few samples of projects Joe has worked on… 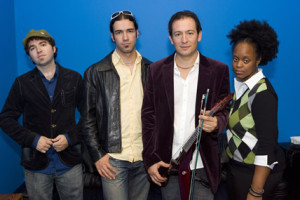 It’s the full-on electro-fiddle-trip-funk experience! Stratospheerius has showcased their “frenzied mélange of alt-bluegrass, progressive rock, jazz fusion and funkabilly” throughout the world. The New York-based group has opened for Tim Reynolds, Mickey Hart, and John Scofield, among many others.

Comprised of some of the most talented and versatile string players in the New York area, Metro Strings is one of the most unique groups to emerge on the scene in recent years.

Joe Deninzon Jazz Trio
This group combines the swinging style of Stephane Grappelli and Django Reinhardt with rock and pop “standards” of the last 30 years.

Original compositions from the film: “What’s Up Scarlet”
Writing/co-production/arrangement/violin performance