Plug In, Rock Out, and Expand Your Horizons!

A few years ago, I was asked to teach intermediate violin and beginning improvisation in the continuing education department at the New School University in New York City.

Many of the adults who came to my classes had played violin in a high school orchestra, gave it up in college as they entered their various fields, and wanted to return to the instrument and make it a part of their lives once again. Oftentimes, folks told me that, as much as they love classical music, their interests range from jazz to folk, rock, R&B, and hip-hop, and they wanted to play the music they love.

Until recently, the education system for young string players has given little attention to fostering creativity and teaching improvisation. Though the timeless beauty of the music of Mozart, Beethoven, Bach, and Stravinsky must be taught to every generation, I believe part of the reason so many young people quit playing, is because they don’t see the connection between their violin, viola, or cello and the music that is on their iPods. As a musical clinician in high schools, I see the faces of kids light up when they realize they can play any style of music on their instrument, be it hip-hop or heavy metal. This inspires them to keep playing and can even bring them back full circle to classical music, which is the foundation.

I see this same spark in adults that I have taught. If playing the violin, viola, or cello is part of your life, you may already play in a chamber group or community orchestra, but there are many avenues to explore that can inspire you, and you don’t have to live in a big city to take advantage of them.

Here are a few things you can do as a string player to expand your musical horizons:

1) Take some lessons on improvisation. I grew up in Cleveland at a time when there were no jazz violin teachers in town, but I didn’t let that stop me. Even if you live in a small town, you can find a guitarist, sax player, or pianist to teach you some basic things that you can apply to any instrument. If you just learn the pentatonic scale, blues scale, and the form of the blues, you can already wail over a wide variety of music. The blues is the foundation to 90% of popular Western music, and a major building block if your goal is to play jazz, bluegrass, or rock.

2) Play as much as you can. Conquer your fear by going to jam sessions around town. Try out some of the things you learn in your improv lesson, and accept the fact that you may not sound good right away. Just keep doing it! Get together with friends who play different instruments, throw a big party, jam and learn together.

3) Go electric. Playing violin through a microphone to be heard over a loud band just doesn’t cut it. Invest in a pickup or transducer. Companies like LR Baggs and Fishman manufacture inexpensive bridges that act as magnetic pickups connected to a quarter-inch cable jack, which is easily installed on an instrument, enabling it to connect to an amplifier or a PA system. There are also transducers, such as The Realist, which simply clip onto your bridge.

Get the Gear for Electric Violin

Electric violins and amps are such a personal choice, that I would advise trying everything you can. Here are a few suggestions:

Transducers: If you have an acoustic violin, viola, or cello and want to invest in pickups or transducers to amplify your sound, I recommend the Realist (www.realistacoustic.com), which easily attaches to your bridge without the need to replace the bridge. Richard Barbera (www.barberatransducers.com) also makes excellent transducers used by many electric violin makers.

Pre Amp: On my acoustic, I use a transducer made by LR Baggs (www.lrbaggs.com), which was installed in place of my regular bridge. I combine this with an LR Baggs Para Acoustic DI. This acts as a buffer between my violin and the PA system or amplifier and warms up the sound with an EQ control.

AMPS: For amps, the Roland AC60 and 120 do a great job of recreating a warm acoustic tone. The Roland Jazz Chorus is a classic used by many string players. If you are more of a rock player, I recommend amps made by Bugera, Tech 21, Mesa Boogie, Kustom, and Fender.

4) Buy electric. If you want to buy an instrument dedicated strictly to playing in an amplified setting, you need to get a solid body electric. These violins, cellos, and violas come in a wide variety of designs since the shape does not affect the sound of the instrument. They look incredible on stage! Manufacturers make four, five, six, and seven string electric violins. Having extra strings is great because you can write a string quartet and hear all four parts, or play low power chords in a rock band. Visit www.electricviolinshop.com to see some of the designs.

5) Invest in an amp. In the electric world, a good amplifier is a crucial part of your sound. Once you have electrified your instrument, go to any music store and spend an afternoon trying out every amp you can. I usually prefer guitar or bass amps for my violin, but don’t rule anything out and trust your ears.

6) Explore the world of effects pedals. The variety of pedals that exist will make your head spin. Multi-effects processors have hundreds of different sounds programmed into one device. It is a great way to introduce yourself to delay, wah, distortion—all the sounds that guitar players have used for years that many string players are now discovering for the first time.

7) Once you gain confidence, find a local band and see if they would like to add a violin, viola, or cello. So many bands in rock, pop, and hip hop are using strings that it’s becoming as common as seeing a guitar on the bandstand. DJs may invite electric violinists to accompany them at clubs.

Joe Deninzon (www.joedeninzon.com) is a violinist based in New York City who leads the band Stratospheerius, plays in the Sweet Plantain String Quartet, and has worked with artists like Bruce Springsteen, Sheryl Crow, Aretha Franklin, Ritchie Blackmore, and Phoebe Snow.

The Next World Review: LET IT ROCK – DME Music Site

Have you ever been to electric violin land? A master of four-string wonder crystallizes his vision

Over the five years that have passed since Joe Deninzon carved a personal niche in the rock domain with his band’s debut, “Headspace”, he made forays into jazz territory with a trio of his own on the instrumental covers collection which is “Exuberance”, but it’s in STRATOSPHEERIUS that the violinist holds the richest palette to take colors from. And this time he goes for a big picture, even though tango “The House Always Wins” and punky yelp of “Tech Support” might throw things to the humorous side to dissolve the wah-wah-adorned cerebral swipe of “The Missing Link” or the heavy “Gods” idiosyncrasy and, thus, blur the intent.

So while “Release” opens the lookout in quite pathetic manner, planting a folk dance onto proggy stem – a trick that works miracles in the vocal-free rave “Fleshbot” – when the full view comes into focus with the guitar-and-fiddle rage of “Climbing” a fabulous vibe goes down the listener’s spine. Ignited by Aurelien Budynek’s axe, “Road Rage”, the most classically-burdened piece on offer and at the same time the sharpest, marries its riff-fest to Balkan swirl, whereas “One Foot In The Next World” thrives on its fusion sensibilities, but “The Prism” is where the Eastern-hued vibe turns triumphal and the purest release reveals itself. After that, another five years would make a cruel wait. 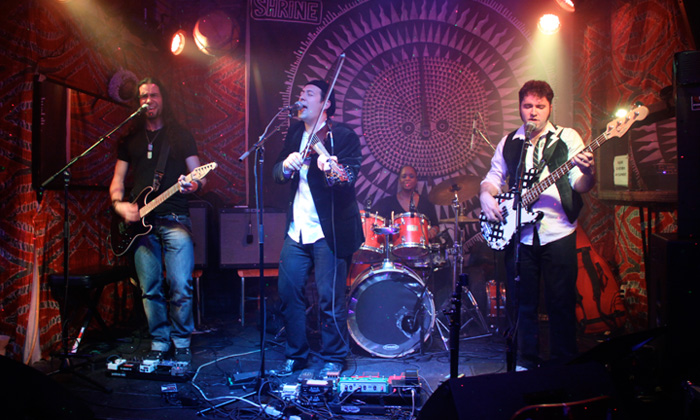 Celebrating the release of  “The Next World,”

the new CD by electric violinist Joe Deninzon and Stratospheerius

Perhaps despite themselves, Joe Deninzon & Stratospheerius are proving the sub-genre of ’70s progressive rock is very much alive and well in 2012. While Stratospheerius describes itself as a “psychojazz trip funk” band, The Next World is squarely in the linage of works from bands like Yes, King Crimson, and Genesis, along with nods to jazz/rock fusion. While Deninzon doesn’t claim any of these groups as influences, citing instead musicians likeFrank Zappa and Jean-Luc Ponty, The Next World seems grounded in the conventions of progressive rock, which gives Stratospheerius the ideal format to showcase their musicianship and songwriting abilities.

For example, one trend in old school prog rock was the tendency to feature lead singers with high-register tenor voices. That’s certainly true of Russian-born bandleader Deninzon. But few other frontmen also excel as masters of the electric violin. A high-flying rock band also usually requires a guitarist capable of both soaring leads and inventive and energetic chord support. For the current incarnation of the group, French fretman Aurelien Budynek does just that. In prog rock, the ensembles are normally built on the tight performances of a rhythm section capable of unusual time signatures and quick tempo changes. Bassist Jamie Bishop and drummer Lucianna Padmore fit that bill to a T.

Their The Next World album opens with the jubilant “Release,” which is about letting go of old restrictions. Tricky time signatures and interwoven vocal lines mark “The Missing Link,” showcasing an extremely psychedelic guitar solo from Budynek. The entire band becomes hopped-up speed demons on “Tech Support,” with appropriate electronic sounds to deliver the message that the singers need that elusive technical support and, “You’re my last resort.”

Offering different moods and approaches, Stratospheerius goes Appalachian on “Climbing,” which erupts into King Crimsonesque rising and falling scales, reflecting the lyrics by a singer who is “still climbing” while he ages and is “looking over my shoulder.” Crashing gongs punctuate the fusion-jazz of “Fleshbot,” which might have fit on  Wired if Jeff Beck had been a fiddle master with a streak of humor.

Speaking of humor, “The House Always Wins” goes even further back in time for influences, with a bouncy, swingin’ tribute to the breed of blues you might expect in a MGM musical-that is, if violinists had been plugged in back in the day. (The bassist for this track is former band member Bob Bowen. The album is dedicated to his memory, as he died in a bicycle accident in 2010.)

The variety of styles continue to range from the rough-edged “Gods,” in which “the more the pain, the more gods we need,” to the gentle instrumental, “Ballad for Ding Bang.” After the rock jam of “Road Rage,” we get one song seemingly deliberately crafted for radio airplay, the poppy “One Foot in the Next World.” The song from which the album drew its title has the listener part in the next world, part in this life, and one part twisting the knife. To close off the album, why not add a touch of ELO-style exuberance in “The Prism”? It’s a dramatic echo of “Release” with lyrics calling for the audience to break free from what imprisons us.

Some of the publicity for The Next World might suggest the album is a Deninzon project with Stratospheerius essentially his backing band. That’s far from the case. The album does have ample samplings of Deninzon’s accomplished violin work, but Budynek’s guitars are on display in equal measure. None of the “jams” sound like spontaneous improvisations, but are rather tightly crafted studio pieces including intricately produced vocal articulations, electronic effects, and multi-tracked instrumentation. Most of the songs are five minutes or less, meaning there are few opportunities for extended demonstrations of virtuosity. It’s an album with bright, vibrant tones from four players who aren’t competing, but rather congealing.
For this release, you’re not likely to think Zappa or
Mahavishnu Orchestra, but rather Trevor Rabin, Jon Anderson, or perhaps Robert Fripp. In the end, The Next World is an album for fellow musicians to appreciate and prog rock fans to enjoy.